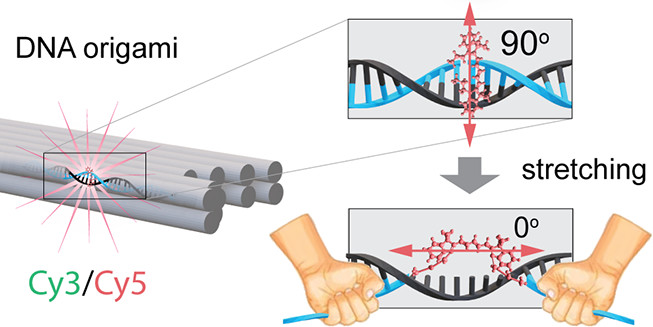 The journal ACSNano published a paper authored by Aleksandra Adamczyk (ESR 08) under the supervision of principal investigator Guillermo Acuna and with contributions from Teun Huijben (ESR 01) and many other collaborators. Titled “DNA Self-Assembly of Single Molecules with Deterministic Position and Orientation” and describes a method to control both the position AND orientation of single molecules (Cy5 and Cy3 fluorophores) using DNA orgami.

An ideal nanofabrication method should allow the organization of nanoparticles and molecules with nanometric positional precision, stoichiometric control, and well-defined orientation. The DNA origami technique has evolved into a highly versatile bottom-up nanofabrication methodology that fulfils almost all of these features. It enables the nanometric positioning of molecules and nanoparticles with stoichiometric control, and even the orientation of asymmetrical nanoparticles along predefined directions. However, orienting individual molecules has been a standing challenge. Here, we show how single molecules, namely, Cy5 and Cy3 fluorophores, can be incorporated in a DNA origami with controlled orientation by doubly linking them to oligonucleotide strands that are hybridized while leaving unpaired bases in the scaffold. Increasing the number of bases unpaired induces a stretching of the fluorophore linkers, reducing its mobility freedom, and leaves more space for the fluorophore to accommodate and find different sites for interaction with the DNA. Particularly, we explore the effects of leaving 0, 2, 4, 6, and 8 bases unpaired and find extreme orientations for 0 and 8 unpaired bases, corresponding to the molecules being perpendicular and parallel to the DNA double-helix, respectively. We foresee that these results will expand the application field of DNA origami toward the fabrication of nanodevices involving a wide range of orientation-dependent molecular interactions, such as energy transfer, intermolecular electron transport, catalysis, exciton delocalization, or the electromagnetic coupling of a molecule to specific resonant nanoantenna modes.